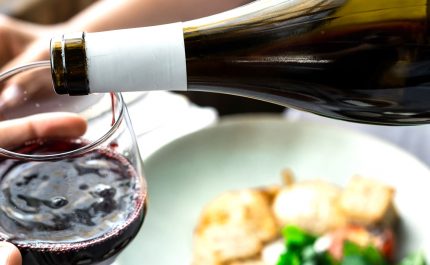 Ten years have passed since the Pescado restaurant opened its doors for the first time, giving new meaning to the term “fish restaurant.” When we met Yehi there for the first time and asked him to taste our wine, he stopped and replied: “Only if you try my fish first.”

Even before choosing Ashdod as the site of one of Israel’s best fish restaurants, Yehiel Zino (known to all Pescado fans as Yehi) honed his skills at Tron, another fish restaurant. That was the birthplace of his love story with wine, and of locals’ love for him.

Fish were always on the table at his home growing up, with his parents cooking the catch of the day in every way imaginable. He would look on, his eyes filled with curiosity and tracking every movement in the kitchen. Years later, as he began travelling around the world, he was exposed to new and diverse flavors. He came to learn how every culture in each country gives its particular local meaning and interpretation to preparing fish and other locally-available ingredients.

With the 2009 launch of Pescado, a joint venture with his partner Eran, Yehi crafted a rich menu of fish and meat dishes, tweaking it to make sure it would delight the local palate. Because of his familiarity with the local community and respect for their values, as well as his desire to spend time with his growing family, Yehi decided to open a kosher restaurant which would be closed on Sabbath. “After years of working in this field,” says Yehi, “going for a kosher restaurant suited us best. It meant having some free time, once a week, which we can spend with our families and running after our children. Like everybody else.”

Professionalism starts with the choice of ingredients.

Eran, Yehi’s partner, is a member of the Jeno family, who have long worked as local fishermen. As a result, the restaurant naturally enjoys a selection of the highest quality fish from both local fishing and from global imports.

“Many restaurants say they pick the highest-quality, freshest ingredients. I actually get to do this. Our direct connection with the Jeno family allows us to create new and exciting dishes every single day. Our dishes are influenced by seasonal produce and harvests, and so we give local flavors the respect they deserve.”

“With such outstanding raw materials, it is always possible to find a seasonal dish on the specials menu, which includes fruits and vegetables delivered that same morning by the local produce supplier. For example, in winter we can enjoy tuna tartare served on a half avocado, and in summer, we combine a variety of fruits with fresh sashimi.”

Wine that complements food must be local.

Equipped with suitable wines, we arrived at the first wine tasting at Pescado before its official launch back in 2009. Within five minutes, we had fallen in love with the local cuisine and with Yehi. We came to that first meeting curious and somewhat hesitant, yet quickly found ourselves dining with Yehi as if we had known one another for years. We started working together the next day and haven’t stopped since.

Given our families’ shared histories and long-standing work together, it was only natural that the young Neta wine would find a spot on Pescado’s list of white wines, complementing the menu. “I’ve known Neta since she was born, and I’ve also known the Neta winery since it was born,” relates Yehi. “We’ve been working hand-in-hand with the family, the vineyards and the winery since the beginning. The location of the winery, close to Ashdod, makes our bond even stronger. When you talk about local ingredients, Neta Winery is as local as it gets. The wine has a mineral, fruity, Mediterranean quality, and it goes well with the narrative of our restaurant.”

The restaurant’s wine style has evolved over the years. At first, the red wine selection was rich and dominant, reflecting the prevailing Israeli preference. However, in recent years, the restaurant’s professional team has been making room for the white wines that complement the chef’s dishes. Patrons have come to understand that the wine recommended by the staff best complements – and compliments — the culinary experience at the venue, and so demand for white wines has grown gradually.

We are very moved by Yehi’s declaration that, “When the raw material is good, the best things come out – just like at Neta Winery.” His attention to selecting the finest ingredients in the restaurant is seen also in his choice of workers. Working in friendship and true partnership with everyone from kitchen staff to waiters and other suppliers constantly in touch with the restaurant, Yehi goes to great lengths to achieve the best results possible.

Our relationship with Yehi, which started in 2009 and continues to this day, extends far beyond ordinary professional relations. Pescado has grown together with the local community and continues to stimulate the community’s interest and curiosity each and every day. We are proud to take part in its story and in that of Yehi, and to walk hand-in-hand with them in realizing their dream, realizing our own at the same time.